Of all the peculiar things that occur in the quantum world, none is more likely to sprain the brain than entanglement.

Entanglement twists together two or more quantum particles, replacing their individual identities with an entwined whole. (Adapted from code by Dan Gries)

In quantum physics, objects can become so inextricably intertwined that it’s no longer fair to think of them separately. They assume a new, collective identity that can persist even if they’re separated by vast distances. Two or more objects linked in this special quantum way are said to be entangled—a situation without parallel in our everyday experience.

Entangled objects share a peculiar bond: When one member of an entangled collection is queried (that is, measured), its answer is always tightly linked, or correlated, to the answers of the other objects in the group. Scientists call the connection shared by entangled particles “entanglement.”

Correlation alone isn’t all that special. Examples of correlation abound in the world around us. For example, students at the same university will tend to have highly correlated locations during the school year—most of them are spending time on campus, after all. It would be unlikely for a random group of people, with no affiliation to the university, to cluster around the same campus.

What makes entangled objects different is that they exhibit stronger correlations than the highly correlated students, displaying a kinship that couldn’t exist outside of the quantum realm.

Imagine for a moment two particles of light, which scientists call photons. Photons can carry different amounts of energy, corresponding to the different colors of light that our eyes perceive. You can think of the photons as pinpoints of light.

Next, we’ll imagine that the colors of the two photons are entangled. In this particular case, that entanglement boils down to a simple rule: Each photon has a chance of being either blue or red, but, once measured, they are always different colors. If we find that the first photon is blue, we would immediately know that the second photon is red. And vice versa. 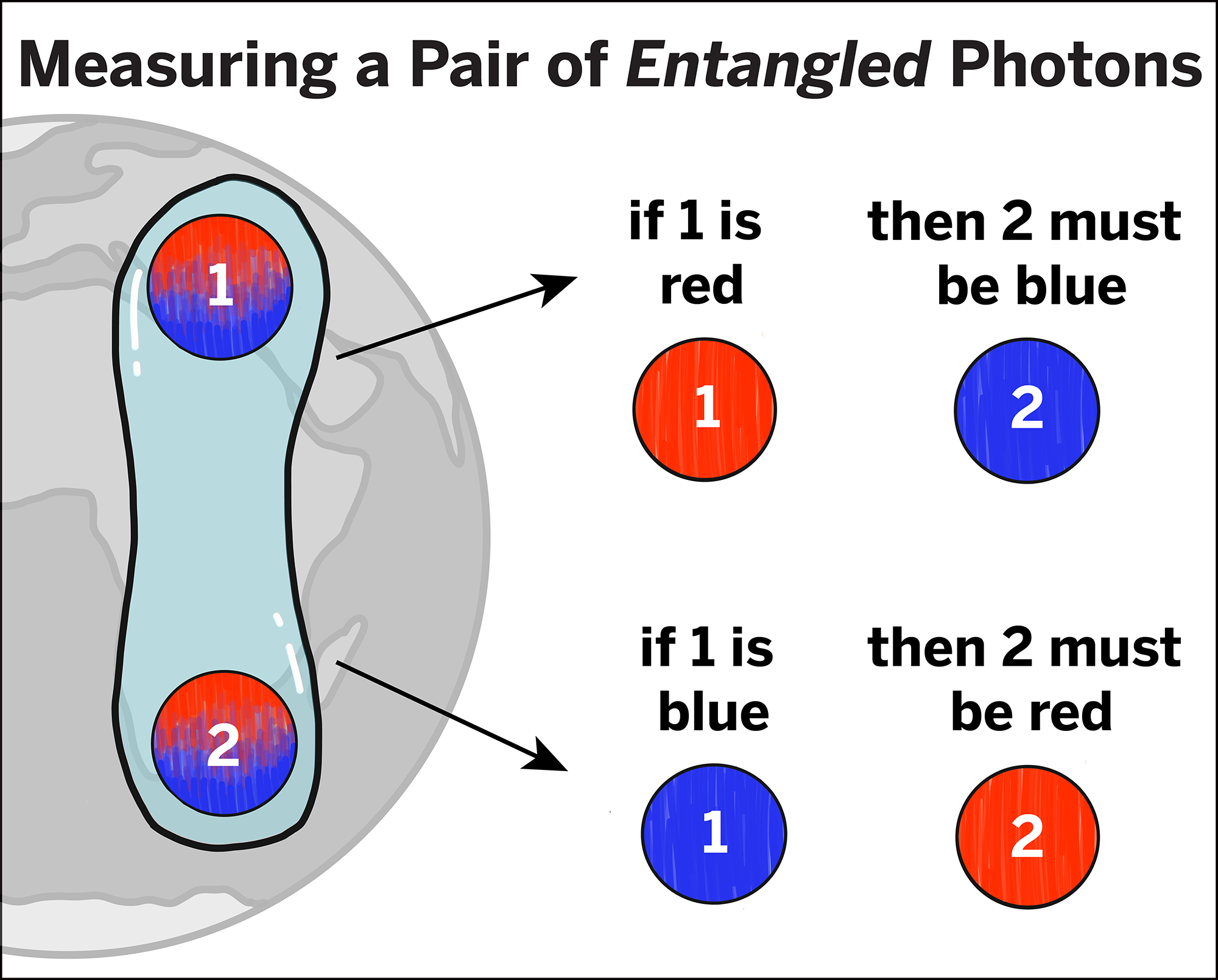 We could test this rule with an experiment. We could prepare an entangled pair of two photons and measure one of them, recording a random result of either blue or red. If we then checked the color of the second photon, we would find that it is always the other color. This perfect correlation would be there each time we run the experiment.

Because of how quantum measurement works, the individual photons don’t really have a color until we make a measurement. Moreover, because the photons are entangled, they are not separate entities but rather parts of a single quantum whole. There isn’t a way to completely describe the color of the first photon without accounting for the color of the second. After the measurement, the entanglement is destroyed, and we’re left with two photons that each have a definite color.

Entanglement has a reputation for being strange for at least two reasons. The first is quantum indeterminacy—the fact that the photons don’t have sharply defined colors until we measure them.

The second is that entanglement can persist over long distances. We could shoot our pair of entangled photons to opposite sides of the galaxy and send astronauts to measure them. When they reported back the results, we would see the same correlation as if the photons stayed right here on Earth. Those correlations remain even though there is no possible way for information to pass between the photons.

These implications bothered Einstein, who argued that quantum physics as a theory must be incomplete. He called entanglement “spooky action at a distance,” and, together with a number of other physicists, thought that particles must carry around extra information—"hidden variables”—that could account for the correlations. The debate around these ideas went on for decades until scientists came up with experiments to test Einstein’s intuitions.

In the 1960s, physicist John Bell devised a method for deciding whether or not quantum entanglement was governed by a hidden variable theory like Einstein’s. Since then, many teams of physicists have performed increasingly sophisticated experiments and all but laid to rest the possibility that each entangled object carries around some extra information to account for its behavior. As in the imaginary example above, the tests have typically involved measuring correlations in the properties of two entangled photons.

While entanglement is known for being unintuitive and weird, even among physicists, it is useful in a variety of applied and theoretical contexts. It’s a workhorse of research into quantum computing, precision metrology and quantum cryptography, and it underpins our understanding of many recently discovered exotic phases of matter. It may even be the key to merging general relativity, our best theory for gravity, with quantum physics—a dream of theoretical physicists for nearly a century.