Lasers can stop atoms in their tracks, which makes them easier to study. 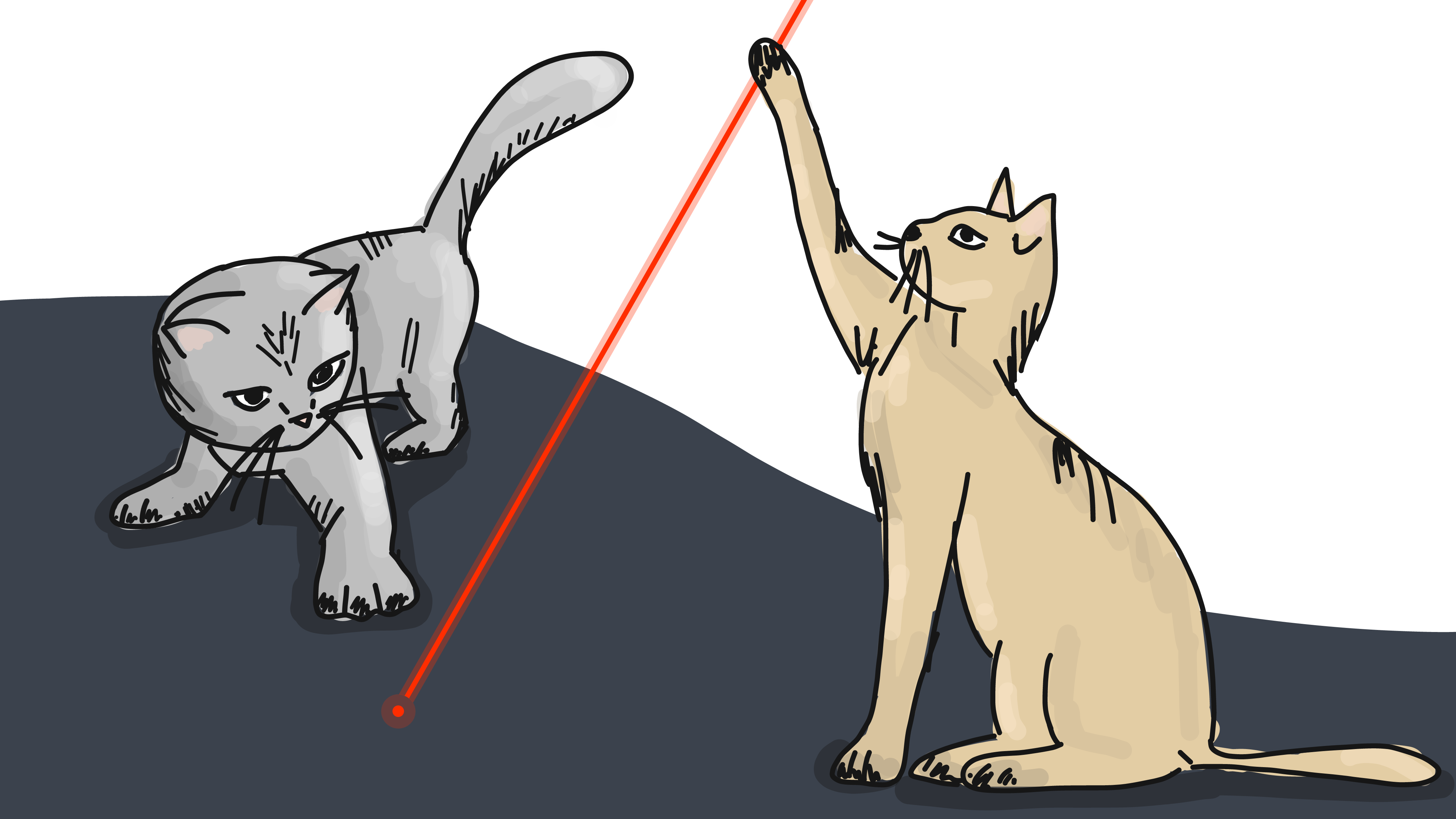 Lasers are for more than just delivering presentations and feline fun. Carefully tuned lasers can stop atoms dead in their tracks.

When stuff heats up, many effects of quantum physics get destroyed (or at least hidden). This is a big reason why we humans don’t experience things like superposition and entanglement in our daily lives.

Even the coldest arctic day is balmy when compared to quantum physics. For example, atoms, which are quantum to their cores, must be chilled to near absolute zero for quantum effects to show up. For a long time this wasn’t even possible, but, bathed in the neon glow of the 1980s, scientists discovered a way to crank the temperature way down. It turns out that lasers, which are awesome for burning stuff or driving cats crazy, are also good at stopping atoms in their tracks. 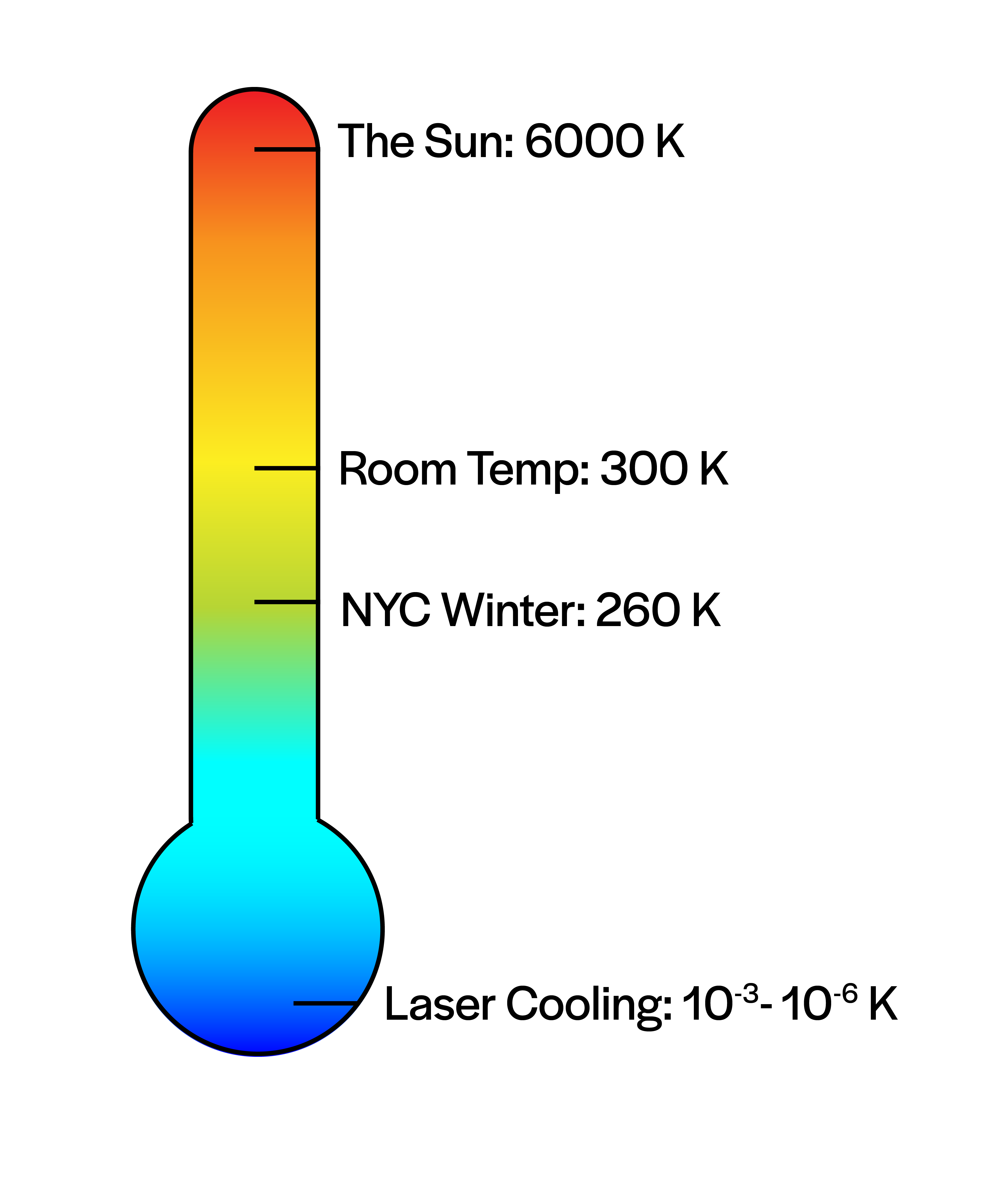 The process for slowing atoms is called laser cooling. At the heart of this technique is an interaction between light and atomic energy levels, which you can picture as a (rather inconvenient) ladder with uneven spacing between rungs. For the electrons whizzing around an atom’s nucleus, the energies between rungs are off limits. If a photon (a bundle of light) has energy that matches the rung spacing, it can boost the atom’s energy. Later on, the atom will lose that energy and sink back to its original rung by spitting a photon back out. This process is called fluorescence, which is apt because atoms do in fact light up like light bulbs.

Since photons and atoms are moving, this energy exchange also kicks the atom around. For example, if an atom is traveling to the left and collides with a photon flying toward the right, the collision will slow the atom down just a tiny bit. The kicks are small, almost imperceptible, like throwing a ping-pong ball at a speeding train. Even though you wouldn't be able to tell if a single ball hit the train, it does transfer some of its motion on impact. If you tossed another billion you would start to notice an effect!

When researchers laser cool atoms in the lab, there isn’t just one atom but a stream of atoms traveling down a steel tube. A laser beam coming from the opposite direction is like an endless stream of ping-pong balls, all tuned to be exactly the right energy to slow the atoms down. As the atoms lose bits of energy, the stream becomes a tiny bit colder.

At their nexus, criss-crossing lasers can bring atoms to a near standstill. The interactive graphic above lets you watch atoms lose energy and cool down as they absorb and emit a continuous stream of photons supplied by lasers.

But there's one more wrinkle in this laser cooling story, and it has to do with a feature of waves: the Doppler effect. You’ve probably experienced this effect countless times, whenever a fire truck passed by, sirens blaring. While the truck is heading toward you, the sound waves from the siren bunch up (at least to your ear) because the truck gets closer to you with each successive whine. The bunched up sound waves have a higher frequency, which causes you to hear a higher pitch. The effect gets flipped as soon as the truck passes: The sound waves get stretched out because the truck is receding with each whine.

The Doppler effect changes the perceived frequency of a wave (the traces above) depending on whether the observer (represented by a blue dot) moves with the wave or against it.

In both cases, it’s the relative motion between you and the siren that causes the sound wave to stretch out or bunch up. A similar thing happens to atoms when they get cooled by lasers. Imagine riding along with the atoms as they begin to collide with the ping-pong ball laser light. As atoms move toward this stream of photons and begin to collide with them, they start to slow down. But once they slow down enough, a funny thing happens: The frequency of the photons starts to change (at least from the perspective of the atoms)! Photons that were once well matched to the atoms’ energy ladder no longer do the trick.

There are two ways around this. Scientists can either continuously tune the color of the photons coming from the laser, or they can adjust the atom’s energy rungs using magnetic coils. Either way, it is possible to take atoms moving at the speed of a bullet to almost a standstill using only laser light and magnets!

Once the atoms are slow (and therefore cold), they can be captured for science experiments. Laser cooling only works with certain metal atoms, like sodium, and a handful of molecules. Even with this limitation this invention was a profound step that led to today’s quantum computing experiments with atoms, ultra-precise clocks, and lots of investigations into the nature of both quantum matter and quantum interactions with light.