Teleportation provides a way to transfer quantum information—represented above by the patterned pink and yellow circle—from point A to point B.

First thing’s first: Quantum teleportation is not like the Star Trek transporter. It won’t let you beam Captain Kirk down to an exotic planet in a blaze of shimmering sparks just before the commercial break. That might be great TV, but it’s still fantasy physics.

Quantum teleportation is more like sending a text message, but instead of lunch plans and emojis, the content of the message is the full quantum description of an object. For example, teleportation lets you transfer the spin of an atom sitting here on earth to somewhere else in the universe.

Admittedly, that’s way less cool than bouncing from planet to planet like some enchanted yoyo. But it’s precisely this kind of teleportation that will someday enable the creation of widespread quantum networks or help power certain kinds of quantum computers. 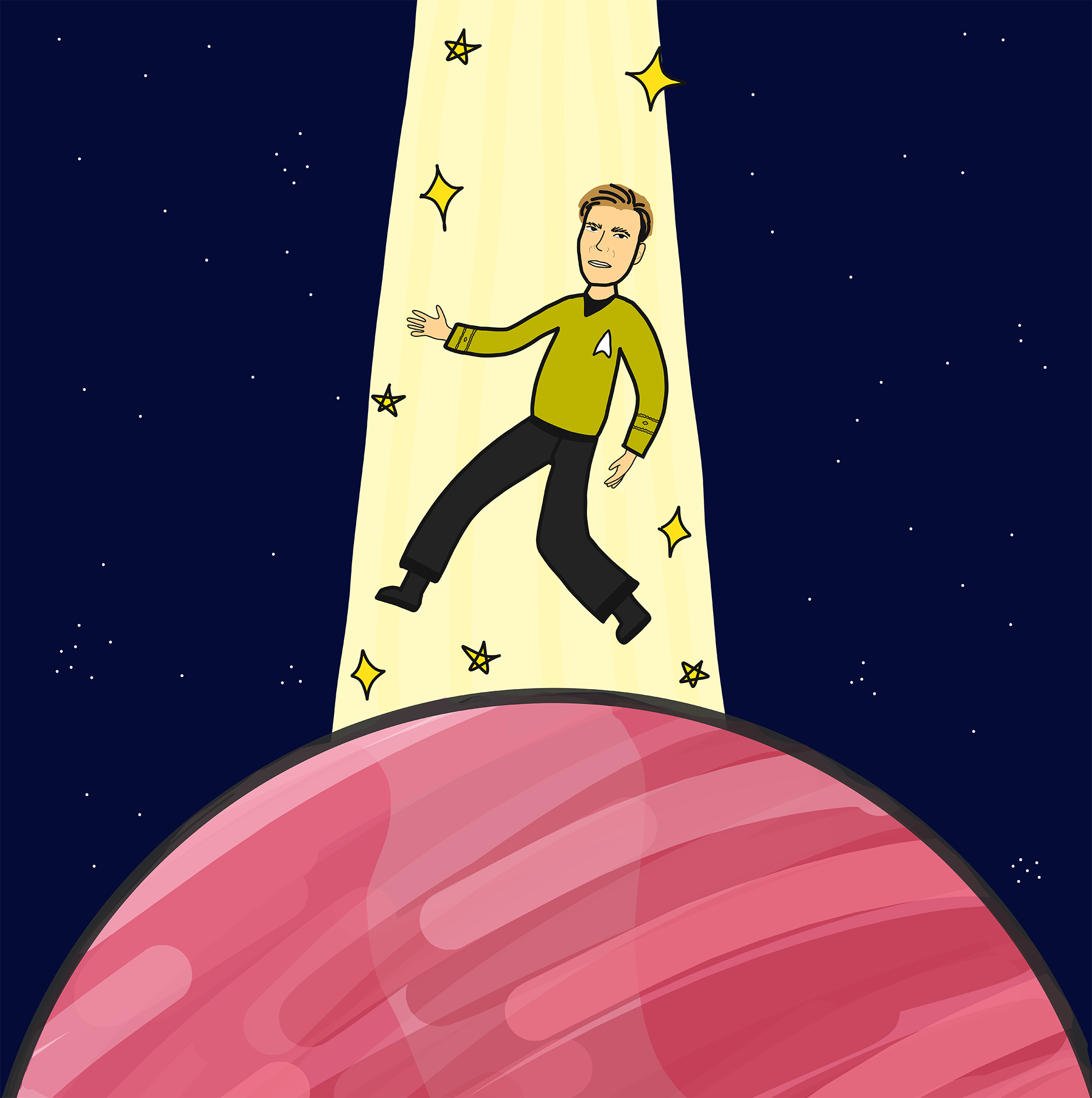 Here, in a nutshell, is how quantum teleportation works. Suppose you’ve got an atom. Maybe your pal across town gave it to you for safekeeping, and now they want it back in exactly the same state as when they handed it over. You could try throwing it in your car and driving it to them, but you would need bulky lab equipment to maintain its quantum characteristics—not necessarily something that will fit in the back seat. Quantum teleportation to the rescue!

Now, you can’t go about teleporting quantum stuff willy-nilly at the push of a button. There are procedures you must follow. You’ll need to establish a connection with your friend across town in the form of quantum entanglement. Think of the entanglement as a kind of channel—a portal through which quantum information makes its way from point A to point B.

For the sake of this example, let’s suppose that this entanglement channel connects two other atoms—one with you (in addition to the one you’re trying to return) and one with your friend. These atoms are called an entangled pair, and their connection has the minimum amount of entanglement needed to successfully perform quantum teleportation.

For a visualization of the teleportation protocol we describe in the text, check out the infographic at the end of the entry.

To recap, there are two atoms in front of you—let’s label them for simplicity. Atom 1 is the one you want to return to your friend without disturbance, and Atom 2 is half of an entangled pair. Your friend is holding the other half of that pair, also known as Atom 3.

In order to teleport Atom 1’s quantum characteristics over to your friend, you’ll first need to perform a measurement on Atom 1 and Atom 2 at the same time. This will sever the entanglement connection you have with your friend and leave the two atoms in front of you entangled with each other. This measurement does something critical. Since the two atoms in front of you are now an entangled pair, the atom you were hoping to teleport has lost its individual identity and all of its defining quantum properties. So what happened to Atom 1?

Well, that atom, as a piece of matter made from protons and electrons, is still right there in front of you. But—and this is the wild part about teleportation—its quantum identity is sitting over on Atom 3, the one your friend has. The measurement implemented a swap: You ended up with all the entanglement, and your friend ended up with the information on Atom 1.

There is a caveat. That information might end up a little scrambled on the other end, which means we aren’t quite done with our teleportation protocol. Quantum measurements are probabilistic, so when you measured Atom 1 and Atom 2 at the same time, you couldn’t be 100% sure which outcome you would get. Texting to the rescue! You can text (or call, or email) your friend with the results of that measurement and—voilà! They can use your measurement results to restore the atom back to its original glory. The teleportation is complete, all without ever moving any matter around.

To summarize, quantum teleportation consists of two transfers of information. One is the quantum transfer, which uses entanglement to transmit quantum information from you to your friend. But that transfer would actually be useless without a little bit of ordinary information transfer. You always need to phone up your friend afterwards to let them know how to undo the scrambling that may have happened in transit.

Researchers have performed countless demonstrations of quantum teleportation. By 2017, one research group had teleported a photon from Earth to a satellite orbiting a whopping 1400 kilometers overhead. There is no theoretical limit to the distance involved. The only prohibition is that no information can travel faster than the speed of light. But that’s the law anyway. 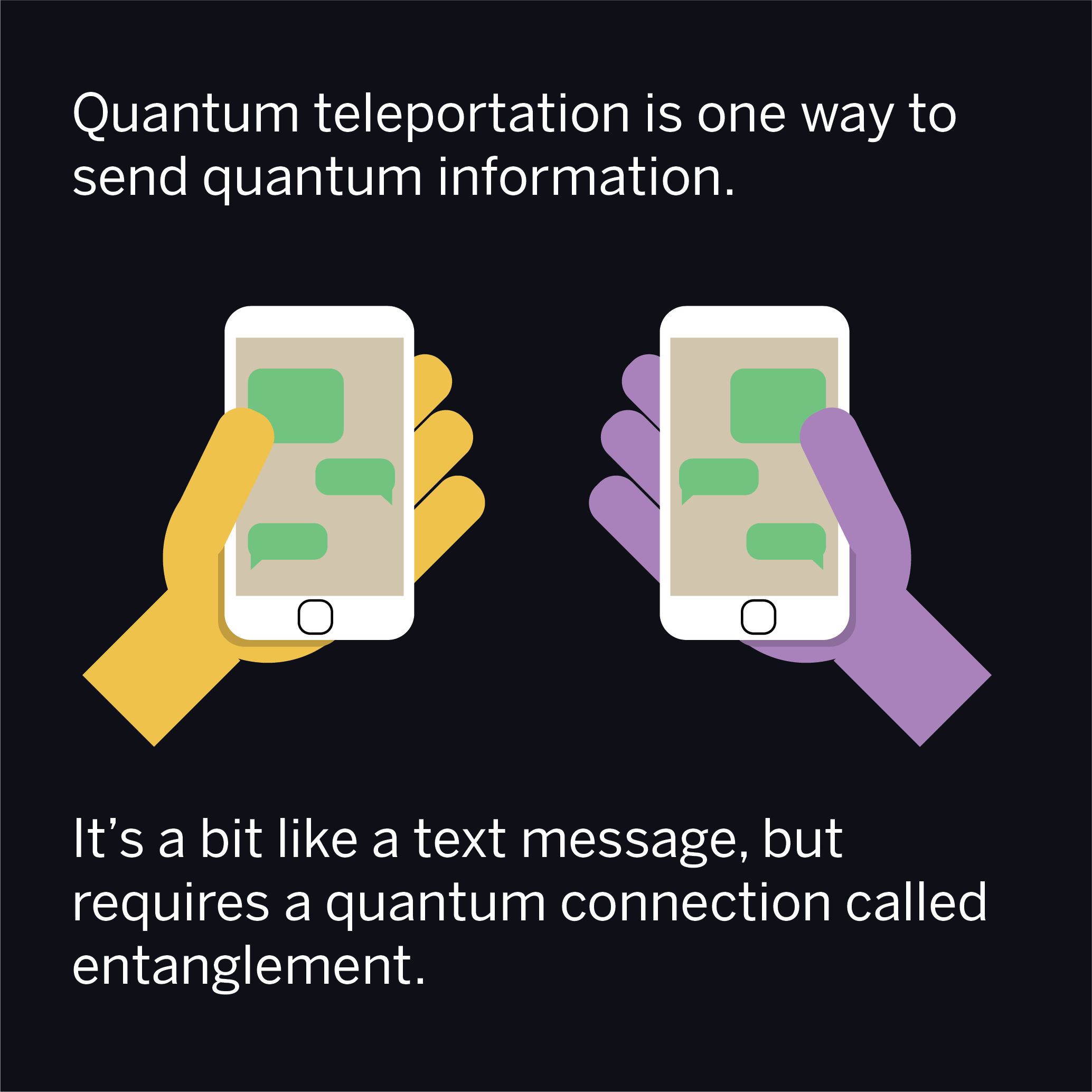 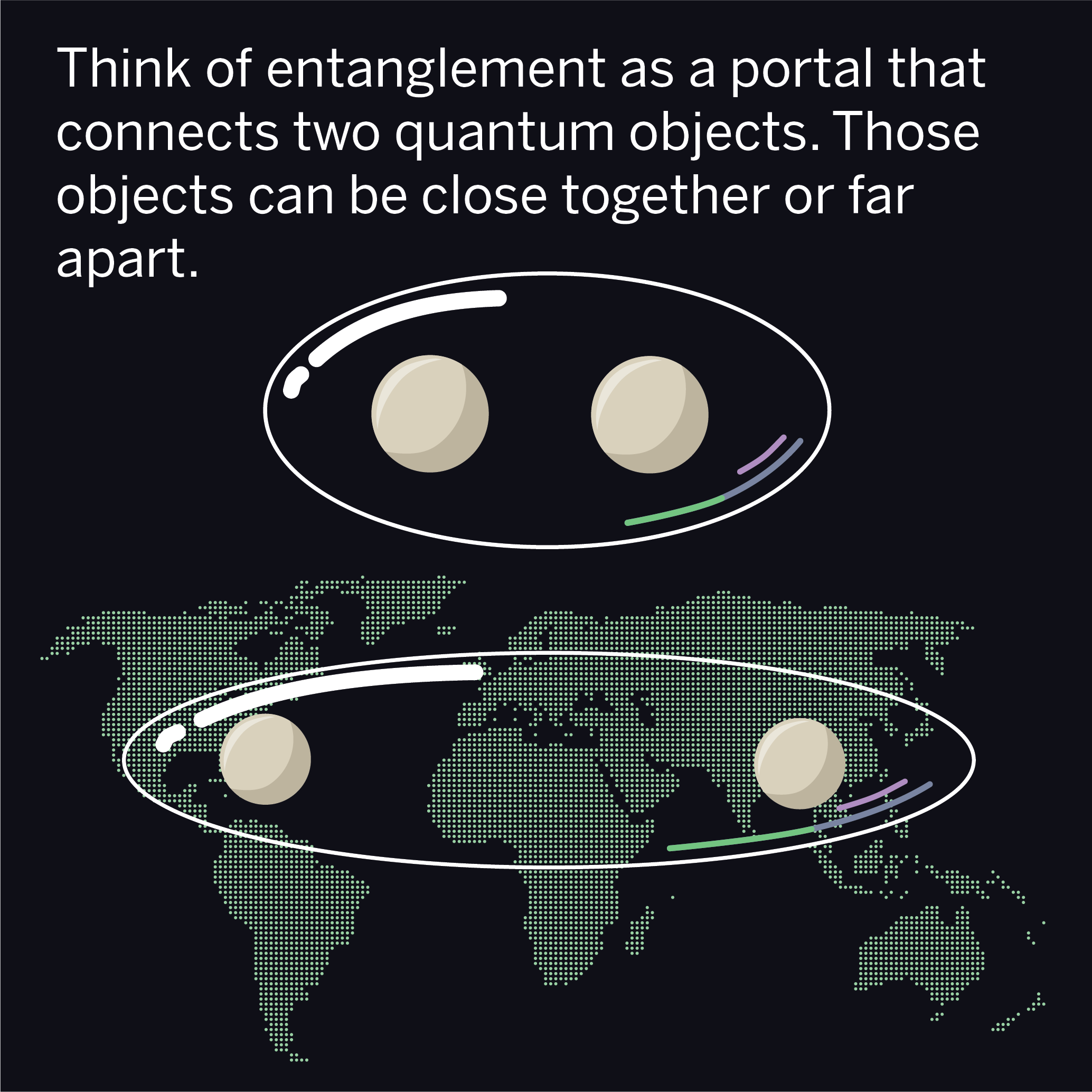 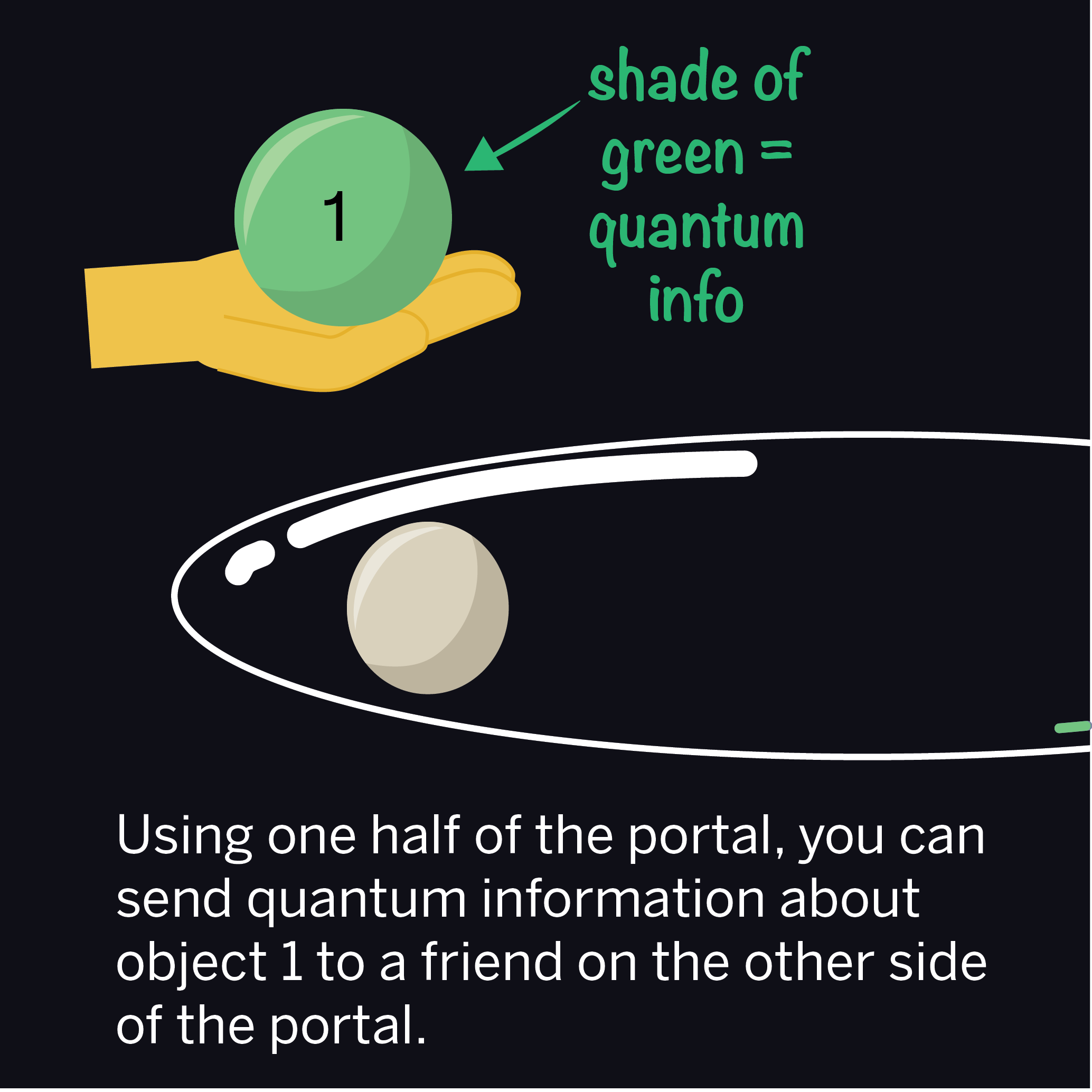 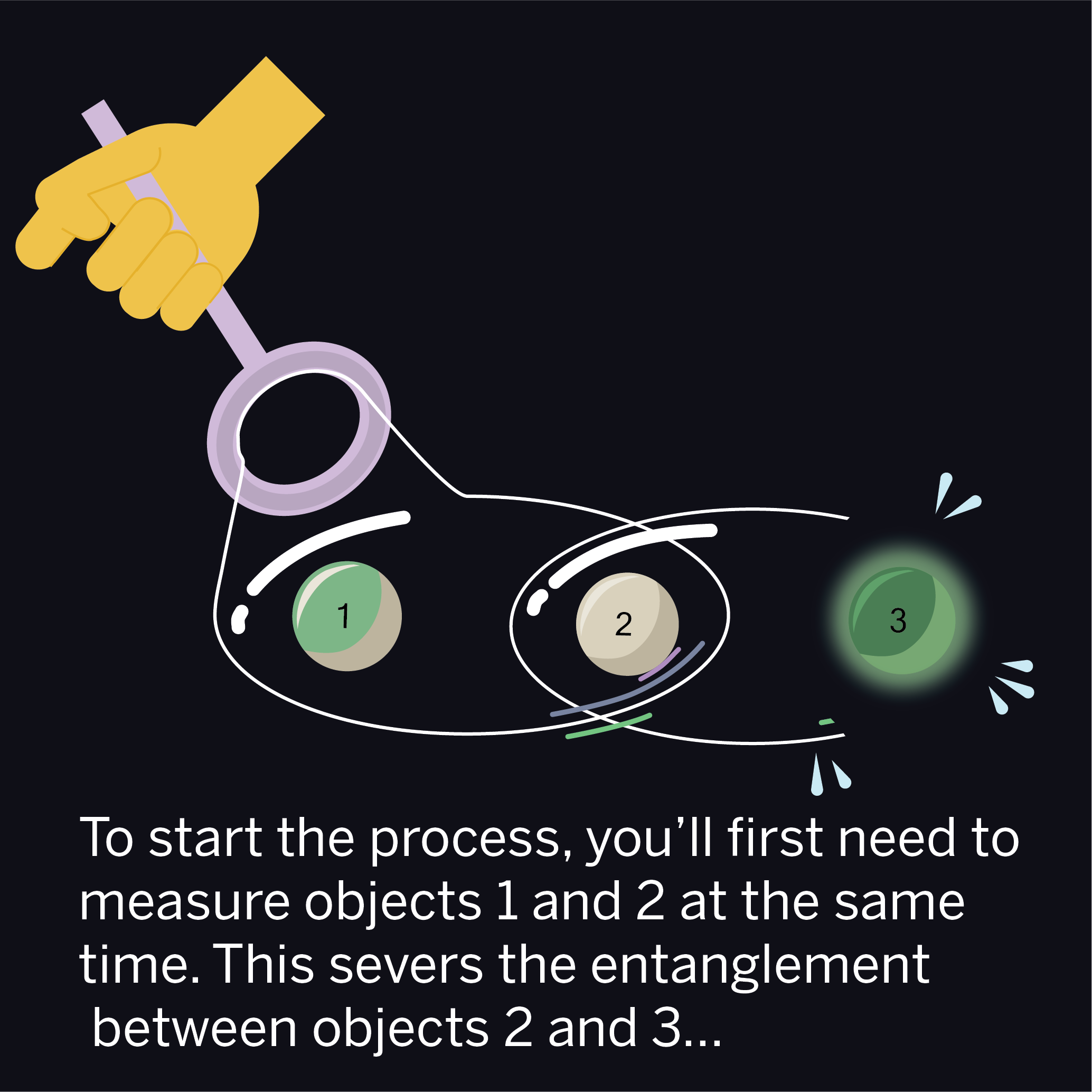 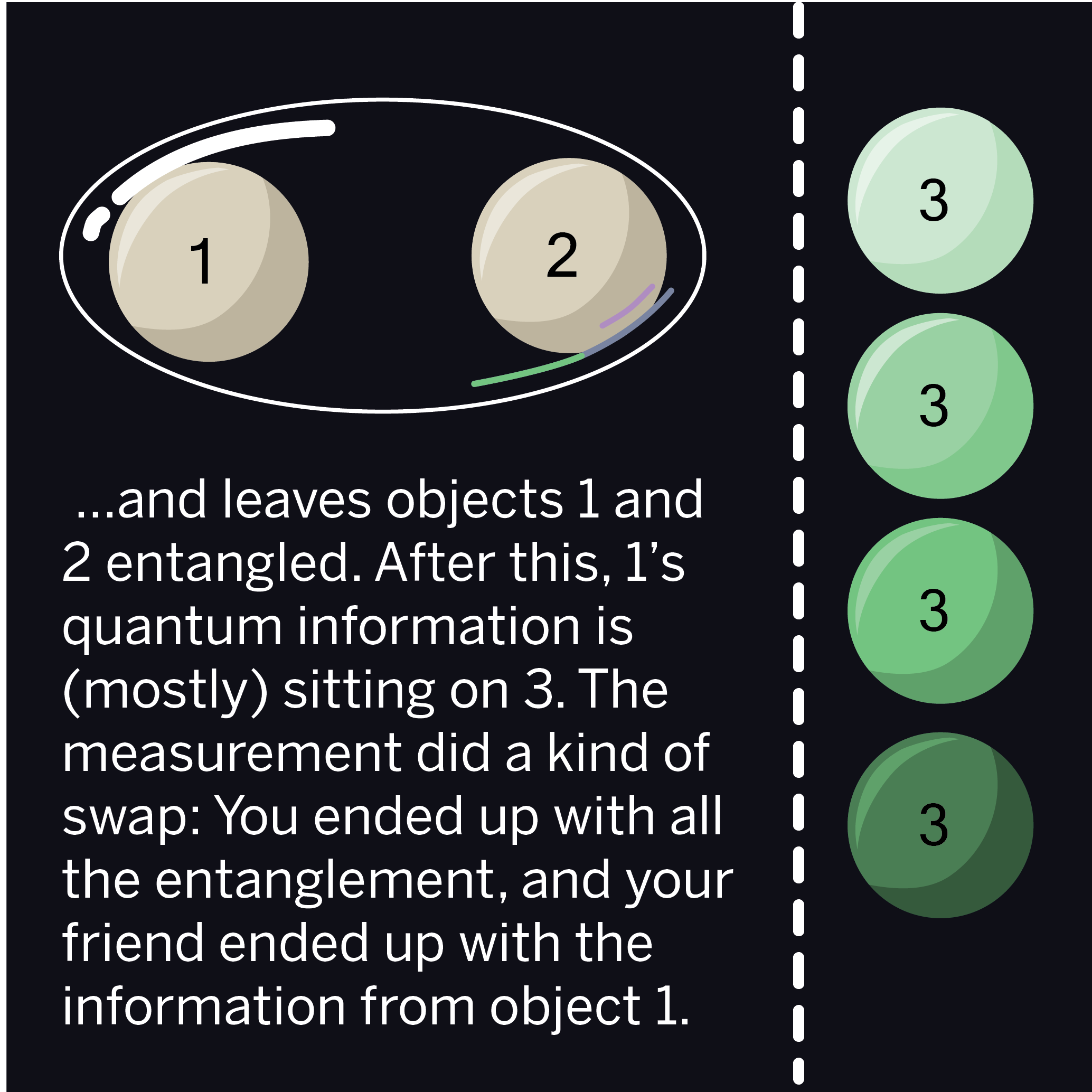 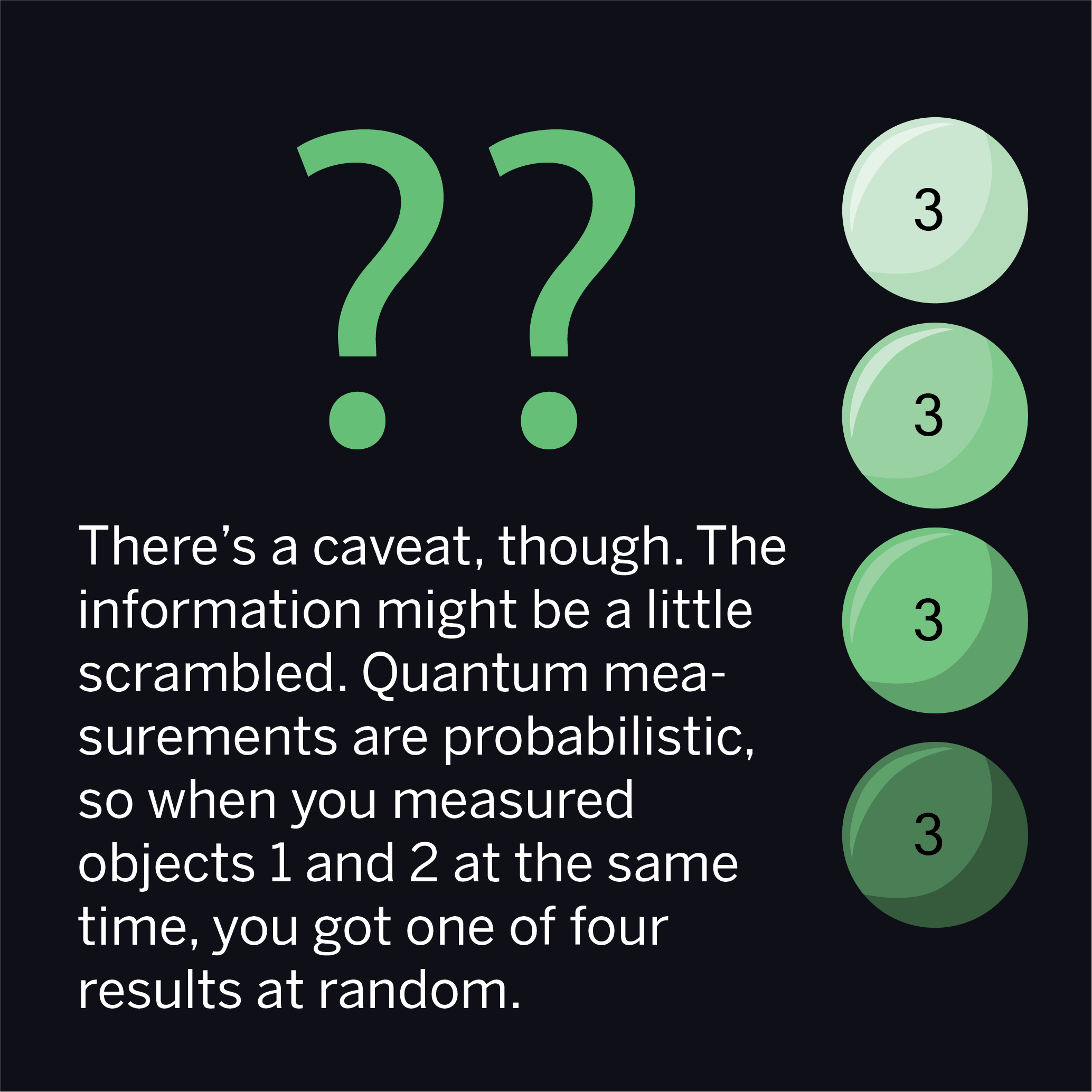 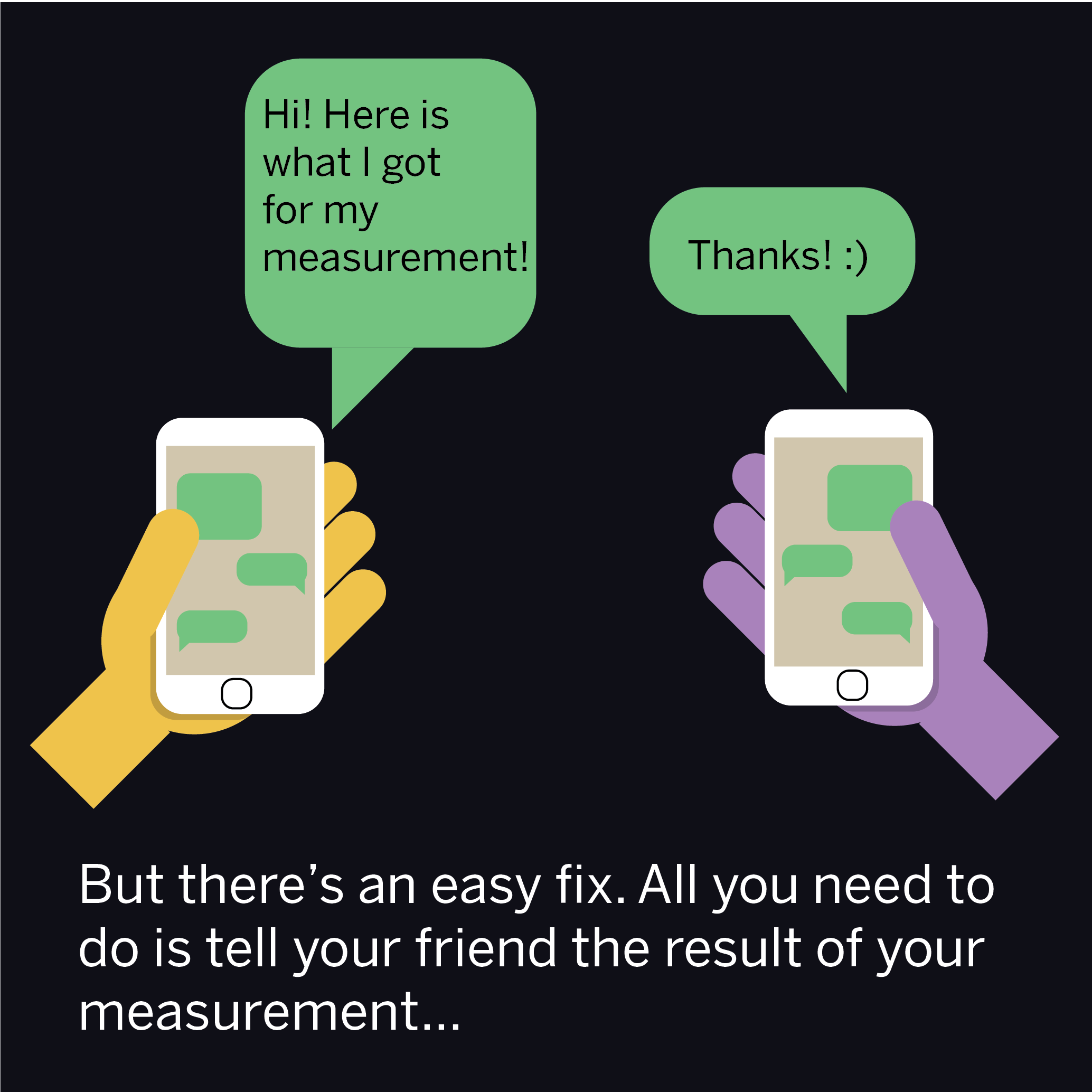 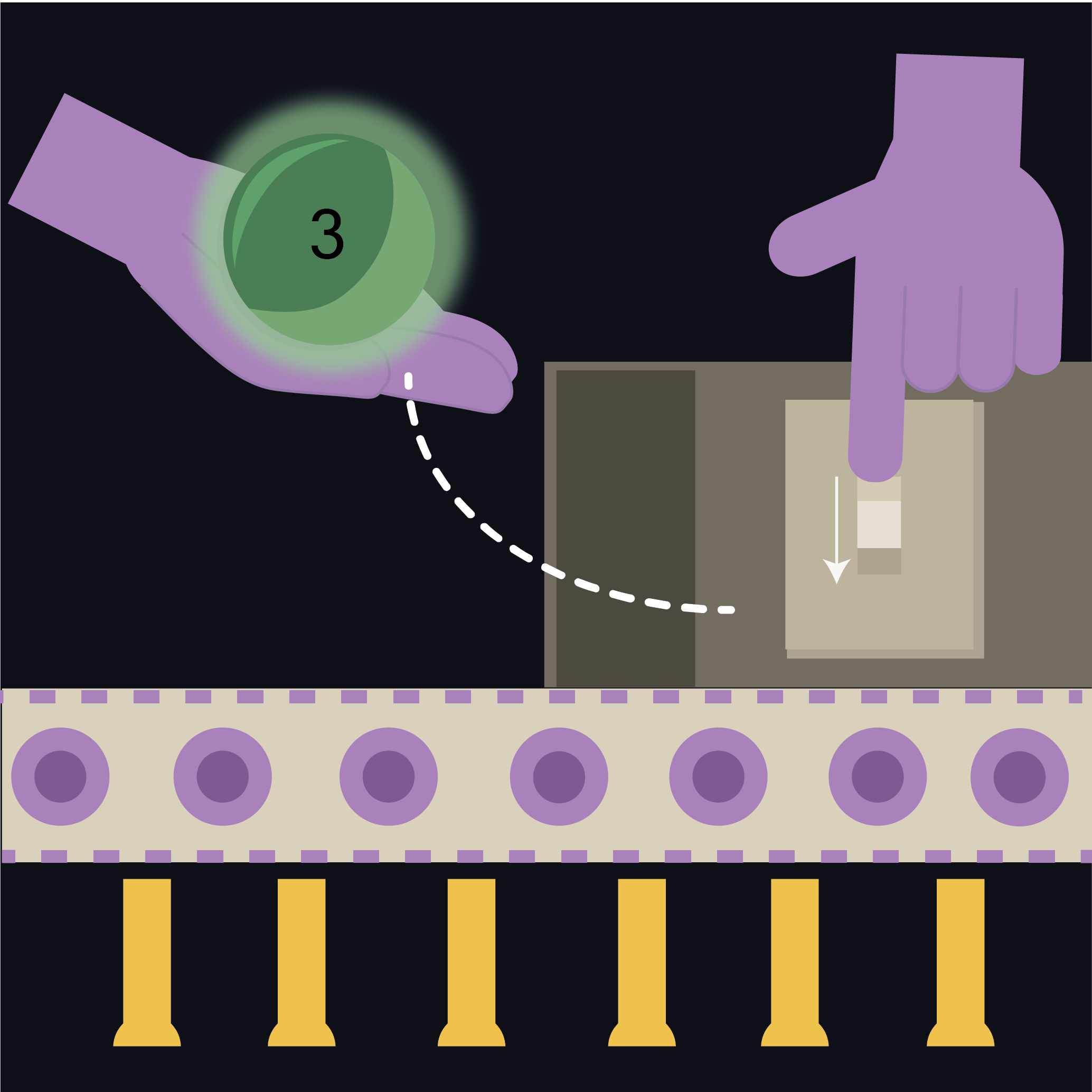 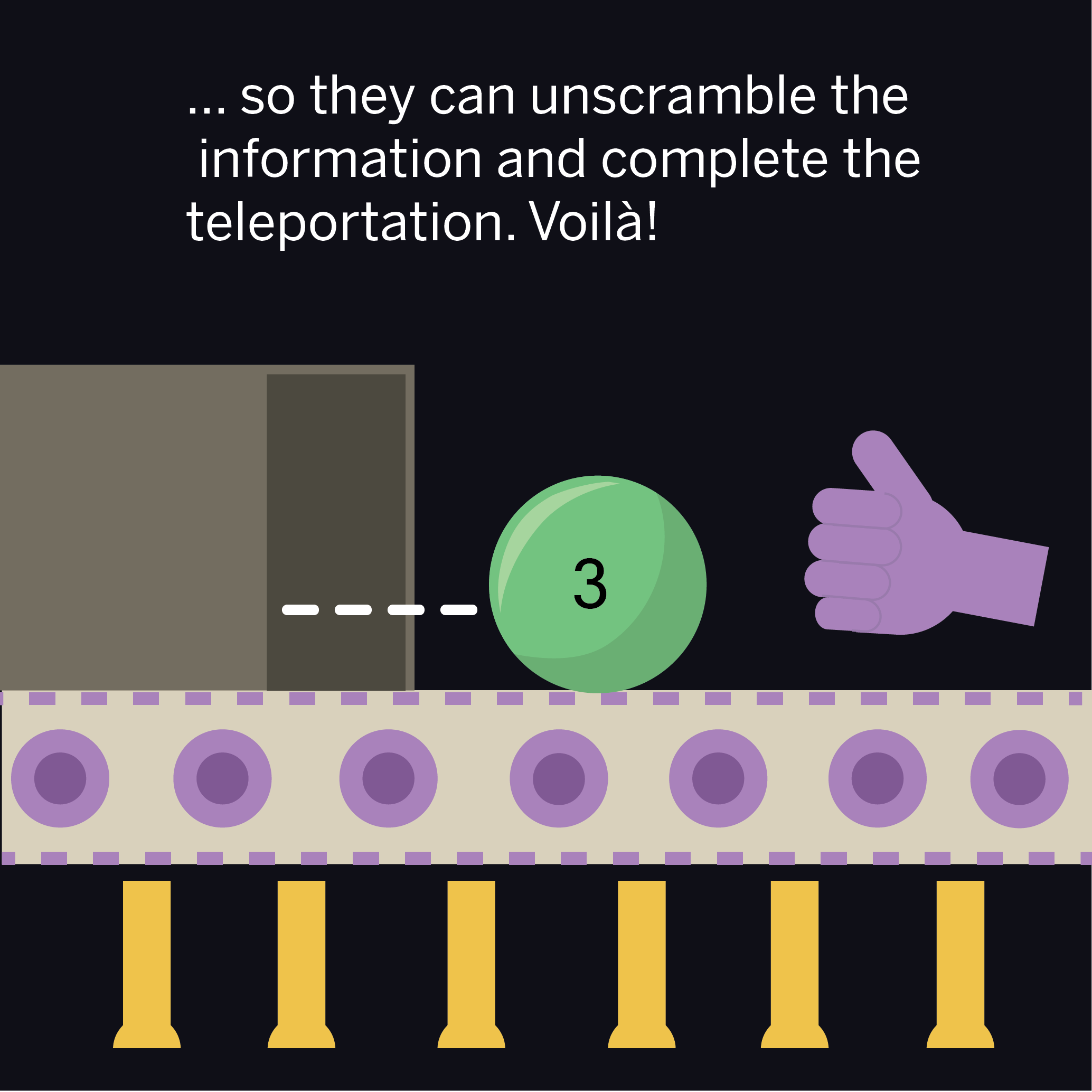